The importance of experimental duration

Most multiple driver experiments have durations of weeks (median 1-2 months see below), reflecting perhaps that longer term experiments demand more resources, which are often limiting.  However, different experimental durations also address biologically different questions and reveal different responses. Consequently, the duration of an experiment is inherently linked to the question of interest: short duration experiments typically address acute responses of organisms to rapid environmental change, whereas long-term experiments address acclimated, and perhaps even evolutionary, responses.  There is a need to balance the advantages of obtaining long-term responses against the progressive loss of realism (such as enclosure artefacts) the longer the experiment proceeds.

The acute responses seen in many short-term experiments typically reveal phenotypic plasticity. In the shortest experiments this plasticity is physiological, and may not even include shifts in gene-expression1. Increasing experimental duration allows more time for gene expression, and acclimation, revealing more chronic plastic responses to Ocean Acidification (OA) . At the same time, increasing experimental duration increases the opportunity for evolutionary change, which depends on whether the genetic composition of the population has time to change, which in turn depends on generation times, population sizes, and genetic variation in fitness or the ability to generate it. Consequently, there is no “correct” duration of an experiment – although we caution against drawing conclusions about long-term effects from short-term experiments.

Choice of experimental duration is, however, complicated by a number of additional – and interacting – considerations, which include:

Duration of the biological process of interest: for discrete biological processes that have short durations (e.g. fertilization of sperm and eggs), results from short-term experiments may provide relatively robust estimates of long-term physiological and/or population responses. Notwithstanding the possibility for long-term acclimation (see above), the discrepancy between responses from short- and long-term experiments on discrete, short duration processes is likely to be smaller than that for long-duration processes such as growth.

Complete understanding of the multi-decadal effects of OA can only be gained by waiting to see what happens over the coming century, however, substantial progress can be made by careful selection of the appropriate experimental duration / question. Issues for consideration when designing experimental duration include:

– plan experimental duration in timescales of the biological process(es) of interest: e.g. gut clearance time, reproductive season, generation time. For studies involving multiple species consider using the median, or maximum, process time as a basis.  Note, this approach will be restricted to organisms with life histories of less than a few years (i.e., it will exclude the majority of macro-invertebrates and vertebrates). The only ways to circumvent this issue are to a) seek field settings; b) ensure that the maximum number of life stages are included in the experiment; c) include the early life stages and target critical transitions and processes such as settlement.

– the importance of prior environmental history and acclimation of organisms in experiments: what effects might environmental history have on your organisms? How long an “acclimation” period should be applied to reduce or eliminate the effects of history on the process of interest? Is it possible to test the capacity of the species/system for trans-generational acclimation? Is it possible to draw conclusions from relatively rapid acclimation about more gradual change?  For references see Boyd et al. (2018).

1 because gene expression occurs at different timescales in different pathways, knowing what processes are – and are not – included in a given experimental duration is only possible with detailed understanding of gene-expression schedules 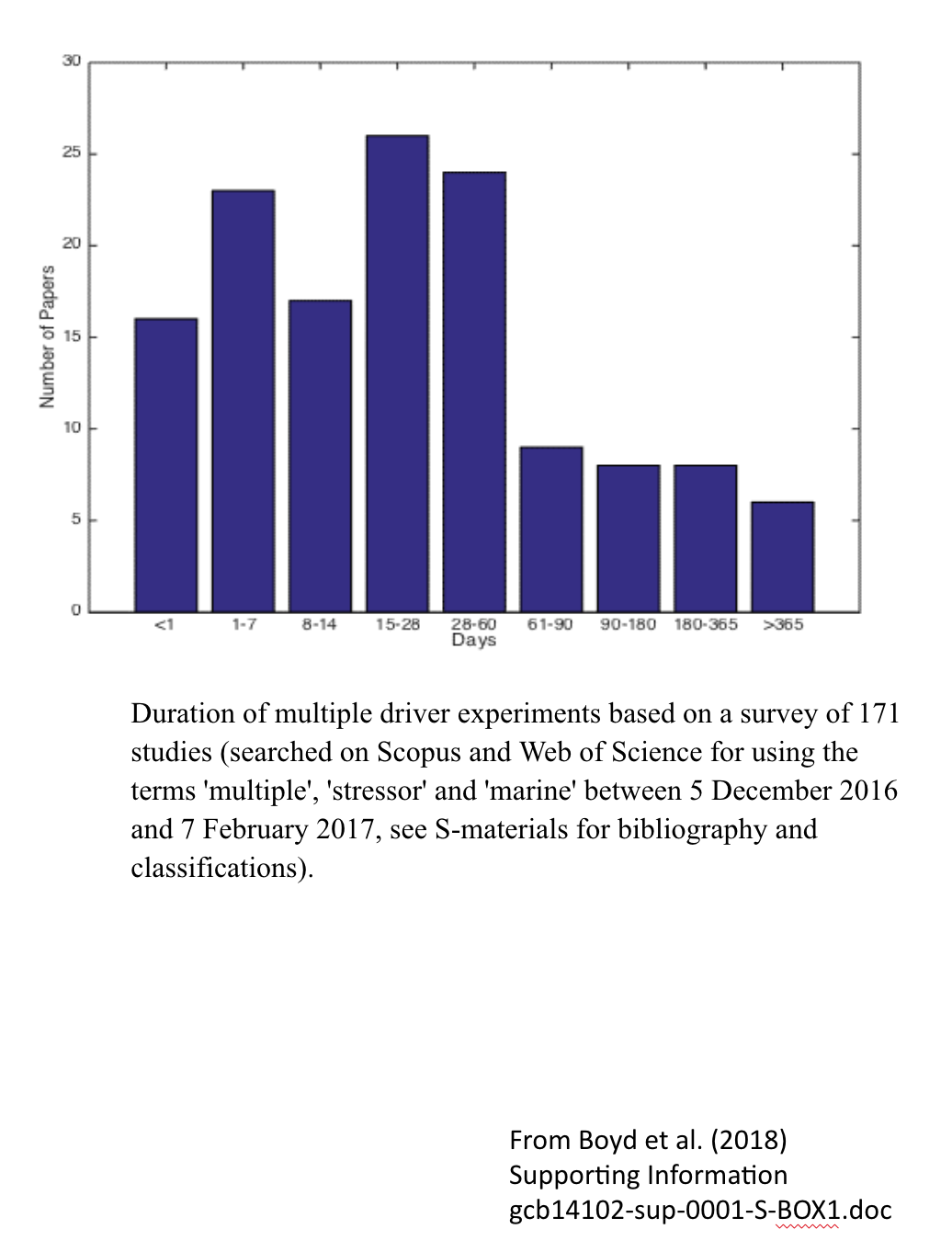